The five most captivating animals in Torres del Paine

Torres del Paine National Park is a fauna and flora sanctuary that has been designated a Biosphere Reserve by UNESCO. In the park, animals give free rein to their wild instincts, and you might be lucky enough to see it.

Take note: this is not an easily broken promise! Whether it is a puma, a friendly rhea (South American ostrich) or perhaps a majestic condor, responsible wildlife watching in Patagonia is one of the most fascinating experiences you can have in the extreme south of Chile and it is perfectly possible if you dare to visit us at Las Torres Patagonia.

So, without further ado, and apologizing in advance to the other southern species –which will soon receive the attention they deserve– this is our pick of the five most fascinating animals you can see in Torres del Paine. 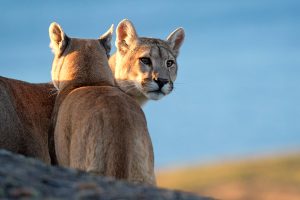 The king of this extreme southern land is the mighty puma. The great Patagonian predator moves around Torres del Paine with the confidence you would expect from the king of the food chain. Hares, skunks, foxes, and even guanacos twice its size, are some of the animals that make up the pumas’ diet.

Human beings, on the other hand, are typically ignored, as the puma doesn’t see them as a threat. This is what Roberto Donoso, our naturalist guide and puma tracker at Las Torres Patagonia explains. But every now and then, hotel guests have the fortune of running into the so-called “lion of the Andes.”

But, what to do if it happens?! Above all, keep calm and enjoy the show. If you are lucky, you might be able to see it hunt, camouflaged in the rocks or the thick vegetation, before jumping on an unlucky guanaco by surprise that will fall prey to the puma’s claws. Click! A rare picture that can be captured at Torres del Paine.

“It is fascinating to watch the puma getting ready to hunt, usually stalking the prey with great patience and strategy, using geography in its favor,” said Roberto about his first sighting of this feline. Our guests will be able to witness this unique wildlife spectacle. We recommend leaving early in the morning, although pumas can also be spotted between 5 and 6 pm. Pay attention to the mountains and the presence of guanacos, as well as some areas such as Las Torres Reserve, where they often cross the Ascencio River, Amarga Lagoon, or Sarmiento Lake.

Currently, our Puma Encounter program offers you unique sightings in Las Torres Reserve. Equipped with binoculars, lucky hikers might even see a female puma and her cubs. Everything is possible thanks to the special protection this species enjoys, which makes Torres del Paine the site with the largest number of pumas in the Americas.

Guanacos are probably the most representative animals of Patagonia and the most adaptable of the four South American camelids. They are the wild cousins of llamas and distant relatives of camels. With their long necks, they are always on alert for danger while grazing. This herbivorous mammal lives in large families in open, exposed areas to spot pumas with their big eyes and long, radar-like ears.

From the top of the hill, one guanaco is usually on the lookout, ready to give the alarm signal to the herd: the hunter is coming, time to flee! Although, of course, they are not always successful. Without a doubt, the puma’s favorite prey plays a crucial role in the Patagonian circle of life. 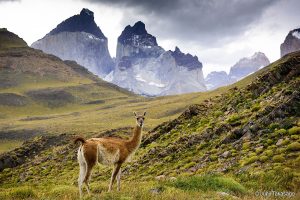 Torres del Paine is also home to one of the largest and most majestic birds of the animal kingdom. With its wings open wide, reaching three meters in wingspan and soaring above 6,000 meters, the Andean condor is the king of the skies. A spectacle you cannot miss!

There are various lookouts throughout the area to observe these scavenging birds that can live up to 70 years. Captive-breeding programs are also being prepared to preserve the species.

Listed as the most captivating and elusive deer in the southern cone, this beautiful specimen has always inhabited the Patagonian forest. Not for nothing, it is one of Chile’s emblems, together with the condor. Huemules live in small groups and are not easy to find, as they are endangered species and their population is extremely small.

The locals say that huemules can be seen near the Grey Glacier or on the way to the Base Torres lookout point. If you are lucky enough to come across one of these beautiful creatures, we recommend soaking up the moment and thanking Mother Nature for this gift. If you don’t see them, you can always check out our flag, where this ruminant has a place of honor. 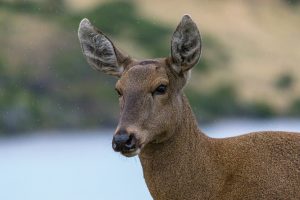 People say that when Charles Darwin arrived in Chile he was in awe of these non-flying birds that were faster than the gauchos’ horses. A rhea can stand almost a meter tall and run up to 70 kilometers per hour, but they are naturally harmless.

The rhea inhabits the Patagonian pampa and, similar to the African ostrich, travels in large groups.

The male rhea is a responsible and committed father, who is in charge of incubating the eggs and taking care of the chicks during their first few days. A rare behavior among birds that you might be able to witness with your own eyes! 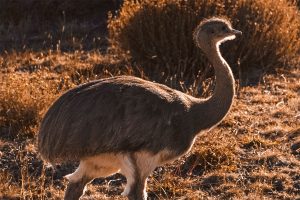 In communion with nature

Chile is a long and narrow strip of land, it is a wild, unique, and unequalled country. Torres del Paine is the place where those of us born and raised in cities have the unique opportunity to be in communion with nature.

If you like photography, you cannot miss the magnificent experience of Torres del Paine National Park. Don’t forget that this region of Chile is home to 118 species of birds, 25 species of mammals, six species of reptiles, three species of amphibians, and six species of fish. Today we have told you about only five! It is time to organize your next adventure, and we’ll be waiting for you!

15 amazing pictures you can take on the W Circuit

Organic agriculture and its contribution to the Patagonian ecosystem is possible in the organic garden of Hotel Las Torres Patagonia.
Read More
Nuevo

Touring Torres del Paine National Park is an exciting experience and quite difficult to describe in words.
Read More
×